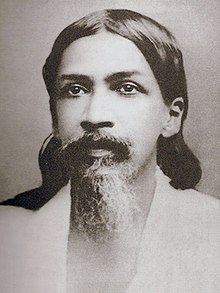 The holy land of India that is Bharath-our Motherland
Made the Nation the richest with great and noble sons and daughters
In the East and West, South and North-every part of the sacred land
From days of yore that spread the greatness of India all the world!

A noble philosopher, yogi, guru and nationalist
Poet who joined movement for independence, moralist
Freedom from British rule, one of thew influential leaders
Turned into a spiritual reformer, introduced a new visions!

Born in Bengal Aurobindo Ghose on fifteenth August, Eighteen
Seventy two studied for Indian Civil Service at King’s
College, Cambridge, England! Arrested and put in jail for writing
Against the British.While in jail, had mystical experiences!

Moved to Pondicherry, leaving politics for spiritual work.
There he developed spiritual practice of ‘Integral Yoga’.
Central theme of vision- evolution of human life into
A life divine!He founded the Sri Aurobindo Ashram!.