The wonderful world in which we live today is the making of the Lord
Almighty Omnipotent, Omnipresent is every where- great God
Omniscient-all knowing- all living beings are HIS making
Over the course of years millions Darwin telling and proving!

February twelfth the day the great Scientist Charles Darwin was born
In Eighteen Hundred and Nine= two hundred and ten years ago; 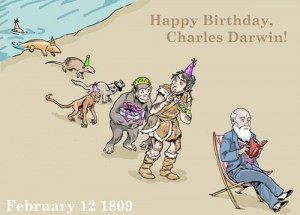 Man was born on evolution of mankind going through stages different
It is not fun but truth that he could prove to the Scientists community!