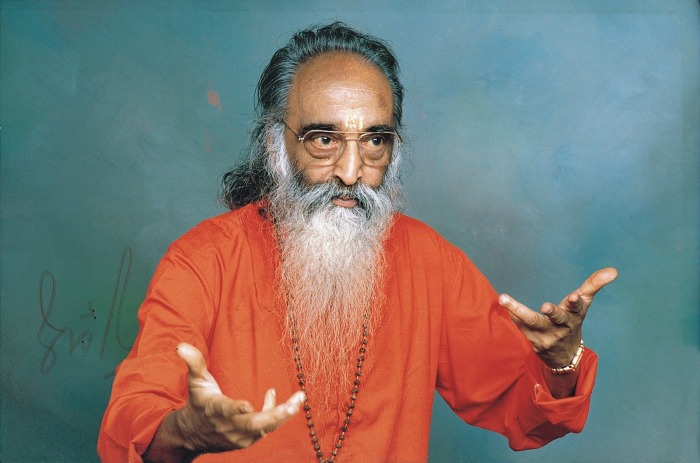 One of my cousin brothers, working as an officer in the Defense Engineering Services  in Pune, Bombay  and other places was a staunch devotees of His Holiness Swami Chinmayananda.  He was transferred to Chennai.

When I was in teens, on one of my casual visits to the then Madras-present Chennai- my cousin broter took me to Mount Road Chordia Mansions  where Swami Chinmayananada was  performing Geetha Gyana Yanga.

Attracted by Swamiji, when I took to training later in my life ,

I used to start with a small quiz with the participants. I would ask them whether they can name the person who was a Bar-at-Law turned Spiritual master to thousands. It was the days of “KOWN BANEGA CROREPATHI” where Amitab Bachan used to give clues to elicit right answers. I will say in his ‘purvashrama’ his name started with “B” and later with ”C’. Next clue will be “He is one of the most versatile exponents of “Bhagwat Gita”. At times I used to get the right answer Swami Chinmayananda and most of the times get disappointed and attribute the phenomenon to the present generations’ devaluation and demonetization of values and virtues!!!!

I used to refer to Swami Chinmayananda who had the assiduous attachment towards the virtue of “PUNCTUALITY” in the success of human beings.

In whichever part of the globe Swami Chinmayananda will have morning lectures for one hour 7.00 am to 8.00 am and evening Geetha Gnana Yagna for 90 minutes during 6.30 pm to 8.00 pm. I have heard a few of his Geetha lectures in my mid teens in Chordia Mansions, Mount Road, Chennai. Where ever he is staying in any city, he will be exactly to his time and start at 6.30 with “Brahmmanandham, parama sukhadham, kevalam , njaanamoorthim……….”

and end with “OM, Thath sath” at 8.00pm. He used to tell the audience that “My six thirty means it is six thirty- neither six twenty nine nor six thirty one. My eight o’clock means eight- neither seven fifty nine nor eight zero one; if you have an appointment at 8.05 next building, you can have it on time without fail!”

We have been brought up in that tradition quite intolerant to being ‘not punctual’.

Swami Chinmayananda conceived the idea of a ‘modern-day gurukula’ to teach the philosophy of Advaita Vedanta to young men and women who would then take the knowledge back to their community. His vision was to build a group  of  full-time, well-educated trained preachers, without worldly ambitions or vested interests — brave and courageous — who were willing to leave personal ties and concerns behind, for a life of surrender to the Divine through service to mankind.

The purpose of the residential Vedanta Course is to provide an ideal opportunity for all those who want to learn and teach. In this two-year Course, students withdraw fully from worldly life and follow a disciplined schedule of classes and activities in an ashram setting to promote learning, reflection and contemplation. Thereafter, they are encouraged to work in the field as missionaries for their own people, although this is not a stipulation for joining the Course.

All Vedanta Institutes in the Chinmaya Mission are called ‘Sandeepany.’ This was the name selected by Swami Chinmayananda, after the name of Lord Krishna’s Guru – Rishi Sandeepany. The word ‘Sandeepany’ itself stands for ‘That which illumines.’ Sandeepany Sadhanalaya Mumbai was the first residential academy of Advaita Vedanta that opened its doors to the initial batch of thirty students in 1963. Swami Chinmayananda’s direct disciples became Acharyas of forty-seven successive Vedanta Courses in seven Sandeepany Sadhanalayas, setting in motion a multiplier effect with 741 students graduating in fifty years.

In the year 1971, when I visited the then Bombay, present Mumbai, for the first time, I visited the Saadanalaya at Powai, Bombay.

Of course it is something that will remain evergreen in mind all through one’s life the experiences one was fortunate to acquire with noble Swamis like Chinmayananda.

Swami Chinamayananda has rendered yeoman service to our religion which according to him “is to give the MAXIMUM happiness to the MAXIMUM people to the MAXIMUM time”. His commentaries on various Upanishads are indeed unparalleled.

Normally Geetha commentary of Tilak “GEETHA Rahasya” is supposed to be one of the best works; it is also opined that Vinoba Bave’s commentary is also great. Swamiji’s commentary is deemed to be of very high order. HH Swami Chinmayananda’s “THOUSAND Ways to the Transcendental” is another excellent work of commentary on Vishnu Sahasranama.

Hailed as the second Swami Vivekananda, Pujya Gurudev Swami Chinmayananda (1916-1993) has left a great legacy behind for mankind. On realizing the true purpose of life,he worked tirelessly and with tremendous energy for more than four decades to spread the message of Vedanta. A great orator, writer, leader, patriot and spiritual giant, he is one of the finest representatives of Indian spiritual heritage. The sprawling worldwide organization of Chinmaya Mission carries on the torch lit by this great Saint.

He has written excellent commentaries in English on almost all the important Upanishads.

They were publishing a nice monthly magazine called “Thapovan Prasad.’

Without devotion, knowledge is tasteless. Without knowledge, devotion is mere empty idol worship.

The greatness is not what we do but, unavoidably, it is always in how we do what we do.

The greatness in an ideology is not, in fact, in the ideology;
it is in the subject which lives that ideology.

‘Surrender inspite of Freedom’ is the way of wisemen.

One who knows how to tune himself to the inner silence,
even in the midst of the din and roar of the marketplace,
enjoys a most recreative solitude.

Every body dies, nobody dies.

Spiritual unfoldment cannot take place merely because of an intellectual appreciation of the theory of perfection. Evolution takes place only when a corresponding change in the subjective life is accomplished.

Mind alone is maya at play.

To assume differences in the world, is to belie this great Oneness in life.

Don’t die while living, live after you are dead.

Everyone points to the other man, who, according to him, is happier. But the only one, who has the courage to declare that he is truly happy, is he who has relinquished all his passions and hungers from within.

It is sure to be dark if you close your eyes.

More important than What is Behind you and what is Ahead of you is what is In you.
Seek it. Centred in it, act and live.

To define God is to defile God.

Grace is only to be found by effort, although it is here and now.

To understand anything is to find in it something which is our own.

Disappointment can come only to those who make appointments with the future.

Out of purity and silence come the words of power.

To listen is not merely to hear.
We in life, hear but very rarely do we know how to listen.
To Listen is to hear, with an intellectual alertness and attention of awareness.

Love is the heart of all religions; the theme of all classical works of art and literature; the song of all devotees. Scientists know only what love does, not what love is. Love is to human hearts what the sun is to flowers.

Universe is a cosmos and not a chaos. There exists a mental affinity; a scientific law;
a rhythm of mental relationship in which the entire living world is held together, in one web of love.

In all worthwhile undertakings, There will be risks of failure, of disappointments, of even disaster. To face them all with inner poise and firm faith is to discover the glory of final victory.

All disturbances and challenges rise not only from our relationship with others,
but in our attitude to all other things and beings.

Flood your mind with love. Look into the eyes of the other and embrace the person with whom you have quarreled.

Comfort – Comes as Guest, Lingers to become Host and stays to ENSLAVE us.

The spirit of Advaita is not to keep away from anything, but to keep in tune with everything.

Prosperity is like wine, which goes to the head, and makes man forget his Creator.
Adversity, on the contrary, sobers him and reminds him of God and his Glory.

Faith is, ‘To believe what you do not see’, the reward of which is, ‘you see what you believed’.

Wisdom is the assimilated knowledge in us, gained from an intelligent estimation and close study of our own direct and indirect experience in the world.

Appreciating the mind as ‘ALL SILENCE’, ‘I AM’ is meditation.

To see the one in the many
Is the casual vision of knowledge.
To see the many in the one,
Is the mission wisdom.

Let not your choice leave behind a sense of guilt.

With this we complete this week’s Sunday Story. The idea came from my  journalist son from Bangalore to write something about Swamiji as a Sunday story. Next week we shall end this topic with more quotations of Chinmayananda.

We shall meet tomorrow as usual. Till then GOOD BYE!

HARI OM the way Chinmaya Mission members greet each other when they meet and leave!

3 thoughts on “A GLIMPSE AT COMMENTATOR CHINMAYANANDA!”