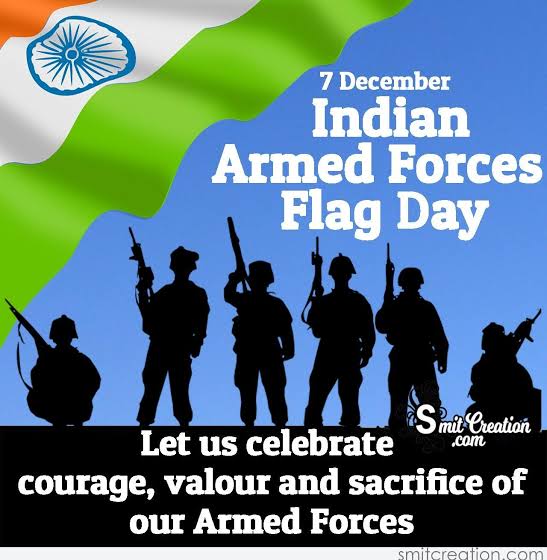 Seventh December today – a day to show our gratitude to our great
Indian Armed Forces who are engaged in protecting our holy and sacred
Motherland India that is Bharat-sacrificing their personal comforts
And conveniences living far far away from their family for long!

Indian Armed Forces Flag Day is today to donate our might for their welfare
Flag Day of India dedicated towards collection of funds from people for welfare
Of the Indian Armed Forces personnel. observed annually since ninety forty nine
A tradition as an honour to the soldiers, sailors and airmen of sacred India.

Jawaharlal Nehru, the then Prime Minister of India, on December 7, 1954 said:

“A few weeks ago, I visited Indo-China and saw our officers and men attached to the International Commission there. It gave me a thrill to see their smart bearing and the good work they were doing in that distant land. What pleased me still more was their general popularity with the people there. By their efficiency as well as their friendliness, they enhanced the reputation of India. Among them were people from all parts of India. They observed no provincial or other differences amongst themselves. I am sure my countrymen will be pleased to learn of them and would like to indicate their appreciation of these young men who serve our country both here and elsewhere so well. A way to indicate that appreciation is to contribute to the Flag Day Fund.”