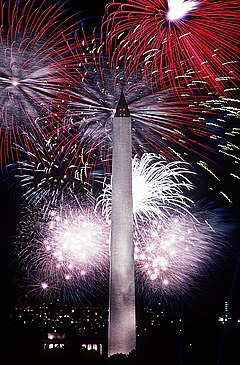 Creator-the Lord Almighty created the whole world to be free
And enjoy freedom and peace, joy and plenty live with independence!
But alas greedy political leaders of various countries
Bring under their control countries small and big to serve under!

Fortunately people are freedom minded and fight for independence!
India that is Bharath fought for freedom from the British for long
Under the leadership of Mahatma Gandhi and got independence !
Fourth of July today -the great Independence Day of
The United States of America- observed in a fitting manner!

United States commemorate the Declaration of Independence
Of the United States, on July Fourth  Seventeen Seventy Six..
The Continental Congress declared that the thirteen American colonies
No longer  subordinate to the monarch of Britain, King George THREE
And were now united, free, and independent states.
The Congress  voted to declare independence two days earlier,
On July second, but  was  declared on this day in Seventeen Seventy Six!

This second post is at the instance of my VISION SCIENTIST  son presently at U S.