Days are days-Good, Bad or Indifferent- proves to be different for
Different persons-though all wish others a great day or good day!
Wishing someone for a bad day is indeed funny and peculiar
Today November nineteenth is “HAVE A BAD BAD DAY” quite alien to us!

Have a Bad Day Day  created by Ruth and Thomas Roy to encourage people
To wish others to have a bad day. sales people always wish their customers
A nice day when they are finished with their sales pitch- a routine.
To surprise people and throw them off guard, wish them a bad day today.

It is a good chance to be impolite without somebody noticing it.
Whether we are looking for a change or want to be secretly impolite,
Today is the day to try it. Looks funny, yet not without a reason!
Funnier days are there to follow in due course-beware viewers! 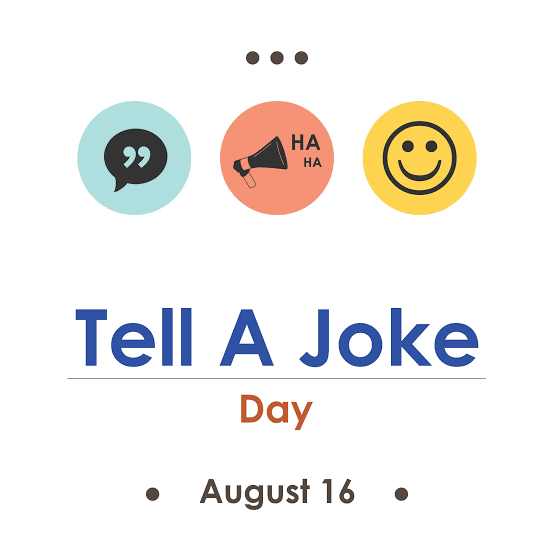 Humour Clubs are picking up here and there everywhere for our good
To make the members enjoy the jokes cracked by many on their Meet
People tired and stressful all over the days and weeks of work
To get relaxed forgetting misery and worries from sides many!

August sixteenth today is TELL A JOKE DAY!  Nice time to enjoy
Surely a great day for all-young and old, read and unread, employed and others!
Jokes have a power medicinal, relax them quick
A single word or a gesture, a question-answer fix
A whole short story nice anything that eases stress
“Joke”-wisecrack, gag, prank, quip, jape and jest sure to impress!

Oh! My Lord! The creator of the Universe great!
Full of joy and happiness, peace and poise a nice treat
People to be in harmony with all-humans sure
Society and the world with joy unalloyed and pure!

Yet we make our lives miserable with actions bad
And cause miseries to others and make them go mad.
Today is -“TELL A JOKE DAY” to dispel agony,
Make them forget their misery and make them merry!

Humor that makes one laugh heartily- great stress buster
Part of human culture for decades and decades-duster
That dusts the human mind of its sorrows and distress
Learn and TELL A JOKE A DAY sans offence, God to bless! 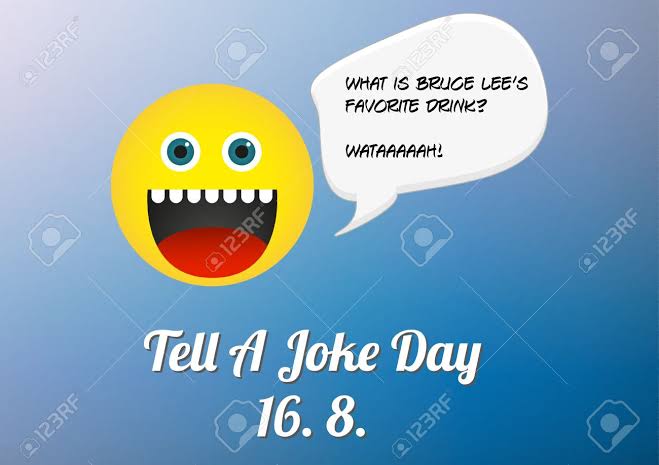 “National I Want You to be Happy Day” is  on March Third
America observes on first Sunday of each year great
A day to encourage all to do something to make others happy.
Put a smile on someone’s face makes to put one on ours, too.

How to has an infinite answers.  A flower here,
A simple knock-knock joke there.  Buy the person’s coffee
Standing in line behind us  Remind our kids how much they love others.
Leave a sticky note for a co-worker telling them to have a joyful day!

Let us draw a happy face in the sand or wall for a stranger
To come across later. Let us give children and friends a hug.
“I Want You To Be Happy Day” post on social media to others also follow
Dozens of ways are there -to make all happy at least on this day!. 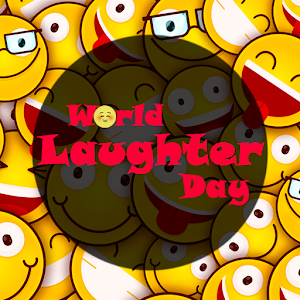 Man is born to be happy and enjoy life- God’s creation
And make others happy and laughter its manifestation!
To give maximum happiness to maximum people is
Our Religion says the Barrister turned Geetha exponent!

Alas! Man is in tears and finds no time and reason to laugh
WORLD LAUGHTER DAY is today first Sunday of May each year! 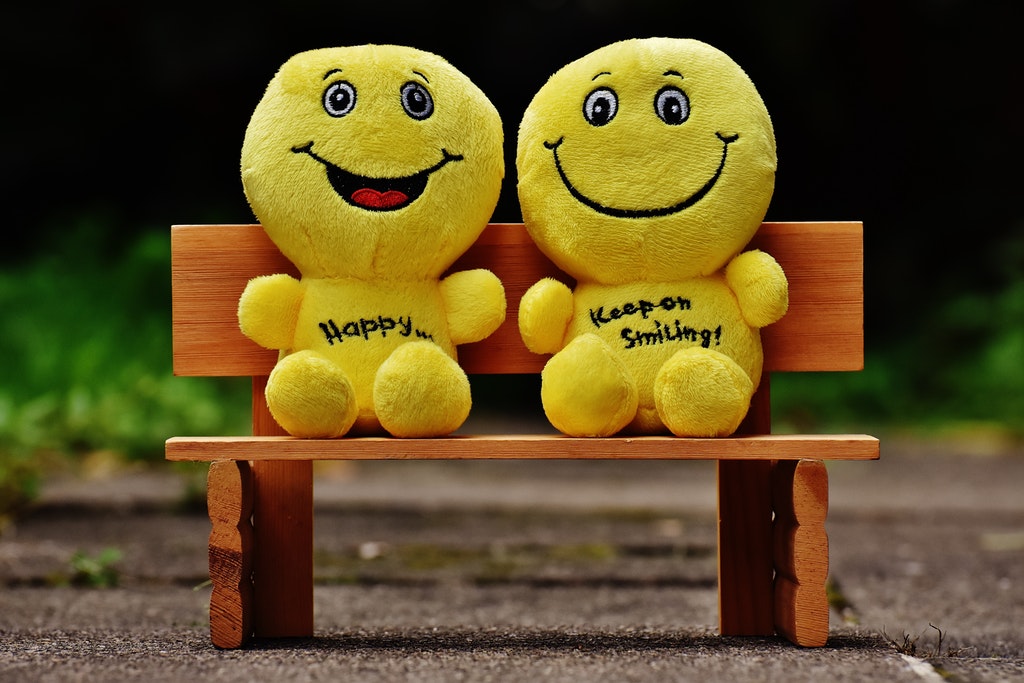 SECOND POST OF THE DAY at the instance of a loving Viewer Mr. Raveendhranath !!

Eighty to Hundred you will be jumping in years twenty
Imbibed all qualities noble from thy parents in plenty
Garnering the support and cooperation of all in life
High echelons you could progress with hard and great work in file
Total dedication to your work infusing in others too
You were a role model EMEM for me in my career!

Towards friends and relatives you were nice and kind-madam ably
Outstandingly helping in all your life- daughters brought up lovely!

Honors came on your way on their own-not going for it yourself
Utmost devotion lased with honesty and humor making ourselves
Never letting us down but encouraging to give our best
Dear and loving all your colleagues Copimbatore to Chandigarh
Respected by all fortunate to serve with you the great ELAISEE
Ever ready to help, ever loving and never hurting any
Dear C R sir! EIGHTY TO HUNDRED bring you all the best on earth!

Reading the first letter of each line :”EIGHTY TO HUNDRED”

P,S: Shri C. Ramanathan former Executive Director of LIC is having his Sadhabishekam on 26th January 2018. The above is the humble tribute by one of his erstwhile colleagues named N V SUBBARAMAN

Great God created world and society needs to be interesting
Can be made so in hundreds of lovely ways very much flourishing
In writing prose, in making verse, in playing games and in building words
In eating, in speaking, in cracking jokes and wits, in pitza cooking!

Here is a day today twenty fourth of April called interestingly
“NATIONAL PIGS-IN-A-BLANKET DAY”sounds indeed very funnily
A day observed all over the world in a happy state of mind
In the states of America, Canada and other parts – nice kind!

Celebrated across the world, referring to a variety
Of different dishes-sausages wrapped in biscuit or dough baked
Served as appetizer, as a breakfast, or any mealtime
Guests and hosts enjoy the “pigs”-with a few ingredients-nice time.!

We know today CARTOON has become a great art and is used in newspapers and magazines. In a paper like the most popular English daily THE HINDU from Chennai has allotted cartoon space in the middle of the Editorial page and normally I look forward for the same as I receive the newspaper in the morning for the cartoons of the renowned cartoon journalists Mr. Keshav and Mr. Surendra. And that I take it as an indication of importance of Cartoons in the print media.
One of the greatest cartoonists of our times was R. K. Lakshman

Rasipuram Krishnaswami Iyer Laxman lived a long life of 95 years. (24 October 1921 – 26 January 2015) He was a great Indian cartoonist, illustrator and humorist. He was best known for his creation The Common Man and for his daily cartoon strip, “You Said It” in The Times of India, which started in 1951.

Laxman started his career as a part-time cartoonist, working mostly for local newspapers and magazines. While a college student, he illustrated his elder brother R. K. Narayan’s stories in The Hindu. His first full-time job was as a political cartoonist for “ The Free Press Journal” in Mumbai. Later, he joined The Times of India, and became famous for The Common Man character.
For some time, my journalist son from Bangalore used to have his own cartoons drawn for his stories!

One of the best cartoons of R K Laxman

CARTOON MAGAZINES
Yes; there are magazines exclusively devoted to cartoons.
Shankar’s Weekly was one such that gave importance to cartoons. TINKLE is even today can be taken as a cartoon magazine.

CartoonWatch
In 1996, Cartoonist Triambak Sharma launched CARTOON WATCH to fill the gap left by the closure of the renowned and much-missed ‘Shankar’s Weekly’. His efforts at creating the only cartoon-centric magazine in India were acknowledged by many well known cartoonists, including Padmbhushan R.K.Laxman, Mario Miranda (Goa),Abid Surti (Mumbai) and Mr. Pran (Delhi).
Yes; there are magazines exclusively devoted to cartoons.

Saying it with humour       Keshav’s cartoon

Courtesy of Surendra/The Hindu A cartoon by Surendra that appeared in The Hindu on April 14, 2012, caricaturing Mamata Banerjee after her government arrested a professor.     Best of RK Laxman’s cartoons –

A great cartoonist Mario Miranda’s cartoons appeared in newspapers such as The Times of India. They also appeared in international papers and magazines.

WHAT IS A CARTOON?
A cartoon is a form of two-dimensional illustrated visual art. While the specific definition has changed over time, modern usage refers to a typically non-realistic or semi-realistic drawing or painting intended for satire, caricature, or humor, or to the artistic style of such works. An artist who creates cartoons is called a cartoonist.

The concept originated in the middle Ages and first described a preparatory drawing for a piece of art, such as a painting, fresco, tapestry, or stained glass window. In the 19th century, it came to refer to humorous illustrations in magazines and newspapers, and after the early 20th century, it referred to comic strips and animated films.

In modern print media, a cartoon is a piece of art, usually humorous in intent. This usage dates from 1843, when Punch magazine applied the term to satirical drawings in its pages particularly sketches by John Leech. The first of these parodied the preparatory cartoons for grand historical frescoes in the then-new Palace of Westminster.
Political cartoons are like illustrated editorial that serve visual commentaries on political events. They offer subtle criticism which is cleverly quoted with humor and satire to the extent that the criticized does not get embittered.

By the mid 19th century, major political newspapers in many other countries featured cartoons commenting on the politics of the day.

Scientific cartoons
Cartoons have also found their place in the world of science, mathematics and technology. In the U.S., one well-known cartoonist for these fields is Sidney Harris. Not all, but many of Gary Larson’s cartoons have a scientific flavor.

Animation
Because of the stylistic similarities between comic strips and early animated movies, cartoon came to refer to animation, and the word “cartoon” is currently used in reference to both animated cartoons and gag cartoons. While animation designates any style of illustrated images seen in rapid succession to give the impression of movement, the word “cartoon” is most often used as a descriptor for television programs and short films aimed at children, possibly featuring anthropomorphized animals, superheroes, the adventures of child protagonists and/or related themes.

I was on the other day attracted by two of the young students drawing cartoons which I have pleasure to share with my esteemed viewers of ENVIUS THOUGHTS.

A few of the cartoons of Ms. Nivetha of 11th standard in a famous school in Chennai.

Here are a few of her sister Ms. Swetha of 6th standard of another school in Chennai.

Equally awesome are the posters prepared by a 5th standard studying Ms. Athithi from yet another great school in Chennai.

Yes; the World of Cartoons is a Wonderful World! Viewers must have the mind to understand and appreciate! They do and hence the increasing importance of cartoons in the journalistic and general world.