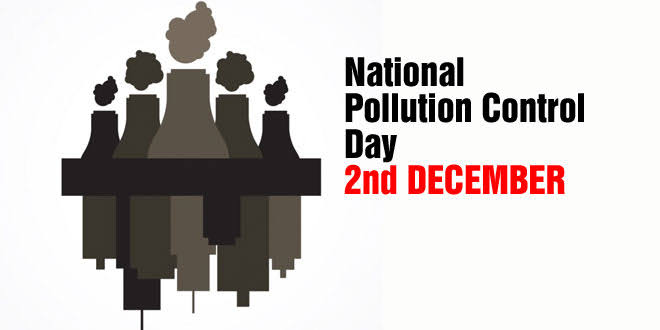 Pollution indeed is Omnipresent and Omnipotent all over the world
In forms identical, causing havoc unbearable every where-be told
To all making them to beware of its ill effects and take measures to end
December second today is National Pollution Control Day -ways to mend!

Noise pollution, smoke pollution, petrol and diesel-leading to air pollution
Affecting walkers on road, travelling by any mode on ground -sans solution.
This day is very peculiar- National Pollution Control Day in India
To give the honor and memorialize thousands of human beings who lost
Their existence due to the Bhopal gas calamity. tragedy happened in
The night of second December in nineteen eighty four- unintentional
Discharge of poisonous chemical Methyl Isocyanate and other chemicals
Released from the Union Carbide Chemical Plant in Bopal unfortunate. 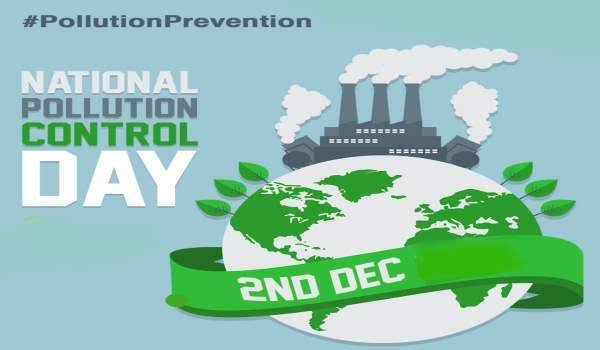 In this fear ridden world today fear for any and every thing
Worst fear injected by the NUCLEAR WEAPONS -multiheaded  monster-
All out efforts have got to be made by all interested in the welfare
Of humanity to eliminate  nuclear weapons where ever they are!

Twenty Sixth September today is the International  Day
For total elimination of Nuclear Weapons as designated
After a high-level meeting on nuclear disarmament
By the United  Nations General Assembly providing
An opportunity to highlight the need to eliminate nuclear weapons
And the social and economic costs of perpetuating them.
Commemorating this Day each year since two thousand fourteen
Giving opportunity for governments and  civil society
To discuss progress and priorities for nuclear disarmament.
Let us on this day whatever we can in this direction!

The Universe created by the Lord Almighty is peculiar and unique
Invisible energy has all the potential to make or mar-right unique
Energy of different types and strength!Almost unimaginable indeed
Energy sure for positive purposes- man’s wish should be-Indeed God\s intention!!

Physical, mental and intellectual-God provides to be spent for good of all
To promote peace and poise,, plenty and prosperity, joy and good health in society!
Fourteenth December today is the World energy Conservation Day globally
To highlight the importance of energy consumption and use in our daily life!

Its scarcity has its impact on the sustainability of world ecosystems.
Every person can save energy by eliminating unnecessary use of fan,
Light, heater or other electrical instruments used in their daily life
The easiest and effective way to save the extra energy. Crores we are!

God Almighty – Thee created the world to be at peace
And harmony. lord! Man in his great greed and needs with ease
With the aid of Nuclear weapons bring in destruction
In his nasty mode -most unfortunate- some justify!

Propogation of peace is universal; social, religious, academic, political – all platforms are used to talk about the need for universal peace! “Peace within” and “peace without” is the refrain of all religions all over the world. Hinduism ends all its vedic verses with the words “OM Shanthi, OM Shanthi, OM Shanthi:”-that is “PEACE, PEACE, PEACE.”
There have been apostles of PEACE from time to time Jesus Christ, Goutama Budhdha, Mahaveer, Mahatma Gandhi, Nelson Mandela, Vinoba Bhave ……………………………………………………………

While THOUGHT and TALK of PEACE go on eternally, fierce battles and wicked wars were and are witnessed in succession!
Whenever we think of the word “PEACE” automatically our mind goes to the word “WAR” and we are reminded of Leo Tolstoy’s monumental write “War and Peace” and a review reads as:
“War and Peace by Leo Tolstoy,
Tolstoy’s epic masterpiece intertwines the lives of private and public individuals during the time of the Napoleonic wars and the French invasion of Russia. The fortunes of the Rostovs and the Bolkonskys, of Pierre, Natasha, and Andrei, are intimately connected with the national history that is played out in parallel with their lives. Balls and soirees alternate with councils of war and the machinations of statesmen and generals, scenes of violent battles with everyday human passions in a work whose extraordinary imaginative power has never been surpassed.

The prodigious cast of characters seems to act and move as if connected by threads of destiny as the novel relentlessly questions ideas of free will, fate, and providence. Yet Tolstoy’s portrayal of marital relations and scenes of domesticity is as truthful and poignant as the grand themes that underlie them.”

Incidentally some more information on War and Peace:

War and Peace is a novel by the Russian author Leo Tolstoy, which is regarded as a central work of world literature and one of Tolstoy’s finest literary achievements.
The novel chronicles the history of the French invasion of Russia and the impact of the Napoleonic era on Tsarist society through the stories of five Russian aristocratic families. Portions of an earlier version, titled The Year 1805, were serialized in The Russian Messenger from 1865 to 1867. The novel was first published in its entirety in 1869.
Tolstoy said War and Peace is “not a novel, even less is it a poem, and still less a historical chronicle”. Large sections, especially the later chapters, are a philosophical discussion rather than narrative. Tolstoy also said that the best Russian literature does not conform to standards and hence hesitated to call War and Peace a novel. Instead, he regarded Anna Karenina as his first true novel. The Encyclopædia Britannica states: “It can be argued that no single English novel attains the universality of the Russian writer Leo Tolstoy’s War and Peace”.
So much of prologue- for this Sunday story in Envius Thoughts in https://nvsr.wordpress.com is today is to think about the day HIROSHIMA PEACE MEMORIAL CEREMONY in Japan. It was on 6th August in 1945- seventy two years ago-that US dropped Atomic Bomb (little Boy) on Hiroshima.

Normally the program of the ceremony is like this:

Satsuki Eda (President of the House of Councillors), Yōhei Kōno(President of the House of Representatives) and Yasuo Fukuda (Prime Minister) offered a silent prayer (August 6, 2008)
Dedication of Water (by the citizen representatives of Hiroshima), accompanied (since 1975) by the music “Prayer Music No. 1: Dirge” by Hibakusha composer Masaru Kawasaki
Opening
Dedication of the Register of the Names of the Fallen Atomic Bomb Victims
Address
Dedication of flowers
Silent Prayer and Peace Bell (for one minute from 8:15am)
The bell is rung by one representative of bereaved families and one representative of children
Peace Declaration (by Mayor of Hiroshima)
Release of Doves
Commitment to Peace (by Children’s representatives)
Addresses (by Prime Minister of Japan and other visitors)
Hiroshima Peace Song, with music by Minoru Yamamoto and lyrics by Yoshio Shigezono
• Closing

The day is observed in several other countries also in a way befitting the occasion.

To think of a war today in 2017, when so many countries proclainng “Nuclear power for peaceful purposese” but are in possession of nuclear weapons- covertly or overtly- none can be definite about the outcome.
The neutral nations like ours –have to play a very important role in this matter as one of the largest democracies of the world commanding respect because of our values and past history down the Father of The Nation one of the greatest apostles of peace.

In the scheme of the Omnipotent Almighty
Who created the Universe- peace and harmony
For the benefit of all living beings in the world;
Man in his need and greed resorts to violence bold!

In the name of Science and development, becomes Master
Resulting in the need for observing a day- faster:
Hiroshima peace Memorial Day is today
Let us focus and work for peace and poise ceaselessly!

The Editor of the E magazine informs as:

Kindly click the second link CONTENTS , select and read Mahakavi NBharathiyar’s “I” and make your kind comment on the space provided thereunder to enable other readers the benefit pf your thoughts. Thanks.

Safety indeed is the natural instinct of all living beings
Alas!all are of course victims some time or other; we are seeing
Of accidents at home or roads, factories and offices misfortune
“Safety, Health and Environment (SHE)” movement serious brings fortune!

“National Safety Day is today” to make conscious efforts
By all to minimize accidents- if not avoid in total – to bear fruits
Let every one take the pledge:”I solemnly affirm that I Rededicate
Myself to the cause of safety, health and protection of environment”.

[Image of the Statue of Prayer in Hiroshima Peace Park]

God Almighty created the world to be at peace
And harmony.  Alas! Man in his great greed and needs
Defeat God; bring in destruction in his nasty mode
Unfortunate some justify and others oppose!

Came time to think of anti-war, anti-nuclear
Saner elements to prevail among all clear
No more wars and no more deadly weapons in the world
Pray and work to make God’s creation be happy bold!

Please visit  Person of the Week at Indian Periodical