indian Independence seventy second arrives soon
Journey to freedom was very long and arduous- like moon
Places and people historic sacrificed all over sure
Deserving praise and prayer on this day a week before pure!

The city of Jhansi-of Rani Lakshmi Bai in U P
A holy place to be worshipped along with  Rani-with pomp
Spark of Sepoy mutiny reached and turned into war aweful
Rani Lakshmi Bai saved her kingdom successfully-powerful!

Betrayers were ever and everywhere- shameless nearby
Rani captured Gwalior with the help of Marathas- but
In the course died during the battle of Gwalior bravely
Referred as  Joan of Arc by the British commanders wisely!

Freedom struggle of a great nation like our holy Motherland
Journey to Freedom of India that is Bharath, sacred land
Unique and distinct in ways several, sacrifices many
To the wonder of the world around-Gandhi’s leadership steady!

Though the way adopted was non violence, activists were there
Who believed in methods stronger than passive and be bold and firm
Resorted to hardcore violent shooting spree-justified ofcourse
We have Vanchinathans and Mahadev Nari Chapekers on course!

British Plague Commissioner Rand and his aid quite harsh in Pune
Unable to bear the humiliations heaped, decided to
Assassinate them –heroic Mahadeo Vinayak Ranade
On this day memorable twenty second June two hundred years ago
Heroic activists were arrested and hanged to death by
The British Government- paved the journey to Indian FREEDOM!

Journey to Indian Freedom was challenging and exciting
Taking different forms and shapes in its long journey rewarding
People of all regions and religions, castes and creeds standing
United under the national leaders all-help extending!

One such that gave the British a temporary victory pure
But made them soon realize that they can’t any longer go sure
That was “REBELLION OF eighteen fifty seven on this day
A mutiny of Sepoys of the Company’s army in Meerut.

The rebellion known by many names-the Sepoy Mutiny,
The Indian Mutiny, the Great Rebellion, the Revolt
Of Eighteen Fifty Seven, the Indian Insurrection and
India’s First War of Independence-Let us salute them grand!

Kindly click the second lin, chose my article BHARATHIYAR’S OPTIMISM, read and make your comments on the space provided below the article so that it can be seen by all readers around the world. Thanks.

— Those who have missed by any chance, please read an article PERSON OF THE WEEK – N V SUBBARAMAN – an Interview of the Editor INDIAN PERIODICAL with me published on 31st July 2016 from their archives. This article has been read by more than 2500 and their second highest read Interview/article in the last two years and more. In the wonderful journey to Indian Freedom
Men and women in lakhs participated with wisdom
Leaders and the led all were with one aim, one desire
And one business in life-Nation’s independence!

Social and political leader was Gokhale
Great leader of the Indian National Congress
Founder of the Servants of India Society
Born this day in six years past eighteen hundred and sixty!

“Indian Self Rule” and social reforms his campaign theme
Leader of the moderate group of the Congress fame
Served with all his might carrying people with him
Was not there to see the light of freedom in his life.

Kindly click the second lin, chose my article BHARATHIYAR’S OPTIMISM, read and make your comments on the space provided below the article so that it can be seen by all readers around the world. Thanks.

— Those who have missed by any chance, please read an article PERSON OF THE WEEK – N V SUBBARAMAN – an Interview of the Editor INDIAN PERIODICAL with me published on 31st July 2016 from their archives. This article has been read by more than 2500 and their second highest read Interview/article in the last two years and more.

Journey to Indian freedom was long and arduous
Patriots in lakhs under the leadership of famous
Mahatmaji walked along with him earlier too
Till we reached the sacred goal in forty seven true!

The great British to whom the Father never had hatred
Jailed and tortured all those who raised the banner sacred
Against and put them behind the bars indiscriminate
In several parts -one was Andaman-Nicobar Islands. 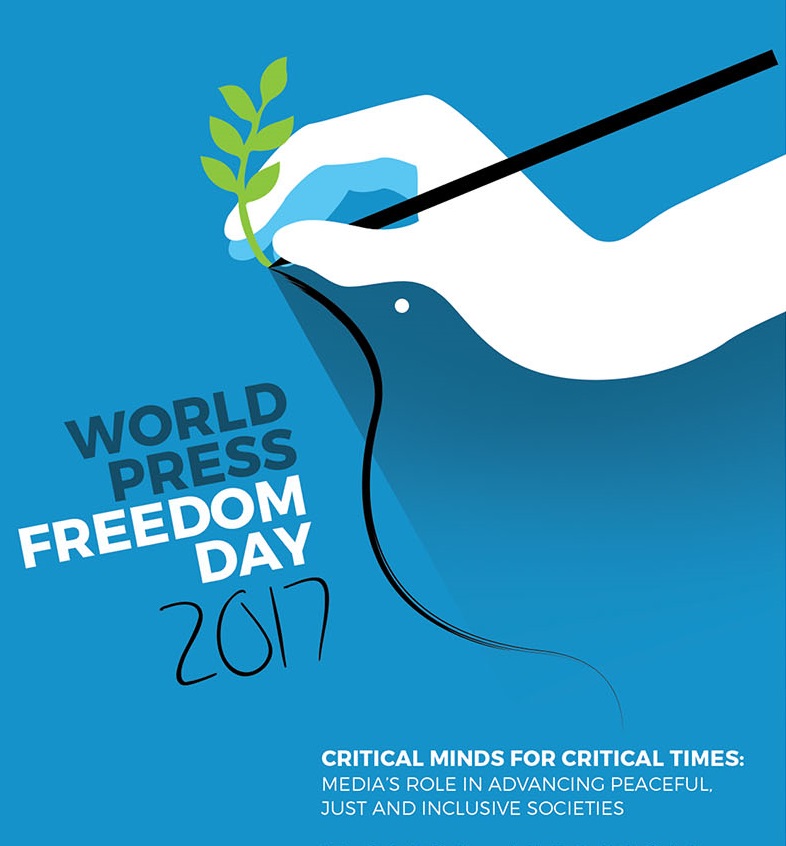 Democracy thrives on four pillars as we know
Legislature, Judiciary, Bureaucracy
And the fourth one called Fourth Estate the great Press-show
The importance of each in a free society!

UNESCO declared every third of May as
“PRESS FREEDOM DAY” and today have to think as
Responsible for freedom of expression- lo!
On the decline- thanks to all powerful POLITICS!

The first three can thrive and prosper if fourth is strong
Society to be well informed and responsible
To voice its opinion free and frank, sans fear
“Critical Minds for Critical Times: Media’s
Role in advancing peaceful, just and inclusive
Societies”.this year’s theme to make it vibrant!

In the long and arduous journey to Freedom
Several landmark events and places of wisdom
Seen and became historical for the future
That are indeed quite great and of golden nature!

The British embarked on a brutal governance
Indians to suffer and rose in revolt with reverence
Mohandas Karamchand Gandhi’s transformation
Into Mahatma began in confirmation!

Champaran is the sacred place- of Satyagraha
A mass movement in support of farmers facing
Poverty due to indigo plantation issue
Gandhi succeeded and the ban was lifted .

I am glad to share with you that with the 114th view at 19/30 hours yesterday viz Wednesday  the 26th April  2017, total views of ENVIUS THOUGHTS has crossed EIGHTY EIGHT  THOUSAND (88000) on the 768th day and 831st post, thanks to your support and encouragement. Kindly continue. Thanks aplenty.